In this section we will look at light and colour, and how our eyes perceive colour. It is useful to have some understanding of this, because it affects the way computers represent colour.

This diagram shows some well known types of electromagnetic radiation, listed in order of decreasing wavelength: 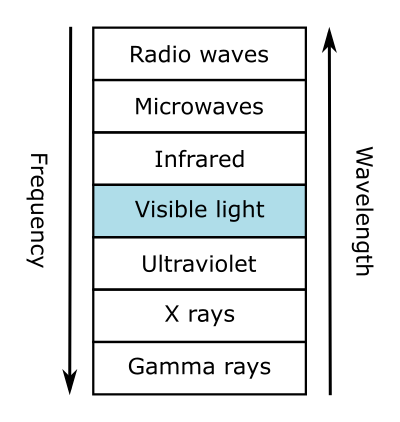 Visible light occupies a very small range of the spectrum, between infrared and ultraviolet, with wavelengths between about 400nm and 700nm. nm stands for nanometre, and 1nm is equal a millionth of a millimetre.

Colours of the spectrum

A rainbow is created when sunlight diffracts through droplets of rain, splitting it into its separate component colours:

You might be more familiar with the rainbow colours being red, orange, yellow, green, blue, indigo, violet, originally listed by Newton. It is believed that "blue" might have meant a colour that was closer to cyan, and he used "indigo" to described a deeper blue.

In fact, there are far more than 7 colours in the spectrum, so dividing the spectrum into 6, or 7, or even 12 colours is quite arbitrary.

If we look at the spectrum more closely, we see the colour varies continuously, so for example there are many shades between red and orange:

The number of different shades in the spectrum is essentially infinite.

The spectrum only contains colours created by light of a single wavelength. But in fact, most light we see is a mixture of lots of different wavelengths. Our eye still interprets that light as being a particular colour. These colours aren't part of the rainbow spectrum. Here are a few examples (there are millions of them):

For each of these colours, there is no single wavelength of light that would appear to be that exact colour. These colours can only occur when several different wavelengths, with different intensities, are mixed together. But we still see them as a single colour.

How we see colour

Fortunately the way we perceive colour a little simpler than that.

The human eye contains three types of colour detecting cells, called cones, that measure the intensity of light across different, broad parts of the spectrum:

The important fact here is that colour as humans perceive it is a 3-dimensional quantity - the amount of light detected by the three types of cones. These cones do not exactly correspond to red, green and blue, however if we mix different amounts of red, green and blue light we can simulate many of colours we see.

The eye also contains a second type of cell, called rod cells. Rods sense light and dark, but they don't see colour. They are more sensitive than cones, so they provide your ability to see in dark conditions (that is why you don't see colours when it is dark). The eye contains more rods than cones, so they can detect finer detail than cones. Some image compression schemes take account of this to improve the perceived quality of the final image.