Object oriented programming is one of several programming paradigms that Python supports. 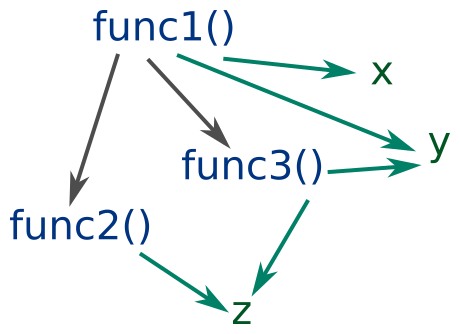 The problem here is that any function can call any other function, and any function can access any variable. This is ok for small, simple programs, but if you try to write a very large program, with more than one programmer working in the code, it can become quite difficult to control.

In Python we might try to solve this problem by using modules. In a module we put related functions and data into a separate file. Each module can be developed and documented separately, and if you want to use a module you must explicitly import it into your code.

In object oriented programming, we take this one stage further. We identify "things" in our program and represent them as objects. An object contains all the data and the functions that are required to represent that thing, all contained together in one structure. This is called encapuslation.

You will already have worked with objects in Python. Strings, lists, tuples, and dictionaries are all examples of objects.

Here are some example objects:

An object has 4 main attributes:

Generally, the type of an object tells you what sort of data it stores, and which methods it supports.

When you create an actual object of a particular type, you add its own unique data.

Note that we don't necessarily know exactly how each object stores its data. That is quite deliberate, and is called data encapsulation (or sometimes data hiding or information hiding). The idea is that you should only access the object by its methods. That way, if Python decides to implement object in a different way (perhaps to make it more efficient), provided the methods don't change, your code will still work.

In Python you can define your own object types. User defined types are called classes. A class is just a particular sort of type.

It is important to understand the distinction between classes and objects. For example the following code defines a Person class that stores the details of a person:

This class has 3 data members: title, forename, and surname. It has one method, __init__, that in effect defines how we create the object. This is explained in the next sections .

This code defines a class, but it doesn't create any actual objects. Here is the code to create a set of 3 Person objects:

If we want to define more data members and methods, we must add them to the class definitions.

File handling code will often uses a class that represents a file path (such as "c:\temp\myfile.txt"). This might be a simple string object, or it might be a special object with extra methods (for example, methods to obtains the file extension).

You would also need a class that represents an actual file, after it has been opened. It will have methods to read and write data from the file.

You might even have a class that represents a folder tree, which for example allows you to find all the *.png files in your home folder including all subfolders.

If you are writing a GUI application you will use classes that represent the different elements of the UI - windows, panes, buttons, menus etc. They will have methods controlling their colour, position, text content etc.

You will also use classes to allow the GUI and document to interact. For example you might use observer classes (sometimes called listeners) that are called when the user clicks a button or menu item etc in the UI, and causes some change in the document.

Don't be concerned of you end up using a lot of classes. A typical desktop application, for example, might contain hundreds or thousands of classes.