The ImageOps deform function can warp and deform images in various way.

In this article we will look at how to add this simple wave deformation to an image: 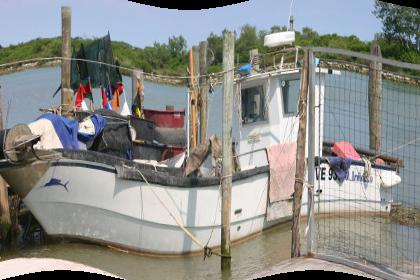 Before we get to that, we will look at a simpler case to better understand how the function works.

Deformation takes an existing image (the source image) and creates a new image of the same size and mode (the target image).

The deformation is controlled by a mesh:

Here the non-rectangular source region is translated to a new position in the target image and also squeezed into a square shape. Since the source quad is a different shape to the target rectangle, the image data has to be distorted to make it fit. This is an important aspect of how deformation works - the source image is never cropped, it is stretched or squeezed to fit it into the target rectangle.

It is possible to scale, rotate, mirror, skew, or deform the region, depending on the shape of the source quadrilateral and the order of the vertices.

This example shows a single region. The code is described below. In most cases, you will divide the image into many regions to apply a deformation to the whole image.

The deform function needs to know how to map the target image onto the required regions of the source image. To do that, it uses a deformer object.

The deformer object is any object implement a getmesh function, which:

Here is a simple deformer that maps the single region we saw above:

A mapping takes the form:

Since the target is a rectangle, aligned to the axes, we can specify it using just two points, the top left and the bottom right. This completely defines the rectangle. However, for the source quad, we need to specify all four corners:

getmesh is required to return a list of mappings. There is only one mapping in this simple case, so we must return a single list with just one mapping:

Here is how we use this deformer on an image:

The result of this mapping was shown in the image above.

Now we will take a look at the wave-transform from the beginning of this section. This requires us to divide the image up into lots of small regions, and map each one separately. This diagram shows the regions we will use:

The right-hand side shows the target mesh. It is a grid of 20 by 20 pixel squares.

The left-hand side shows the source quads. Each square of the target is taken from a parallelogram-shaped area of the source image, that has been displaced and sheared relative to the target grid. The overall effect of this is to make a wavey image.

Here is the wave deformer:

There are lots of squares in the mesh, so we will create them programmatically inside getmesh. First, the target mesh:

This simply creates a set of squares, of size gridspace by gridspace, that completely cover the image.

Next we create an corresponding set of source quads:

It is the transform function that controls what happens to the image. The function leaves the x coordinate unchanged but displaces the y component by a function related to the sine of x. This causes the image to be displaced vertically as you move along the image in the horizontal direction.

The WaveDeformer class provides a general method of creating a set of target squares and corresponding source quads.

You can create a variety of other deformations simply by altering the transform method.